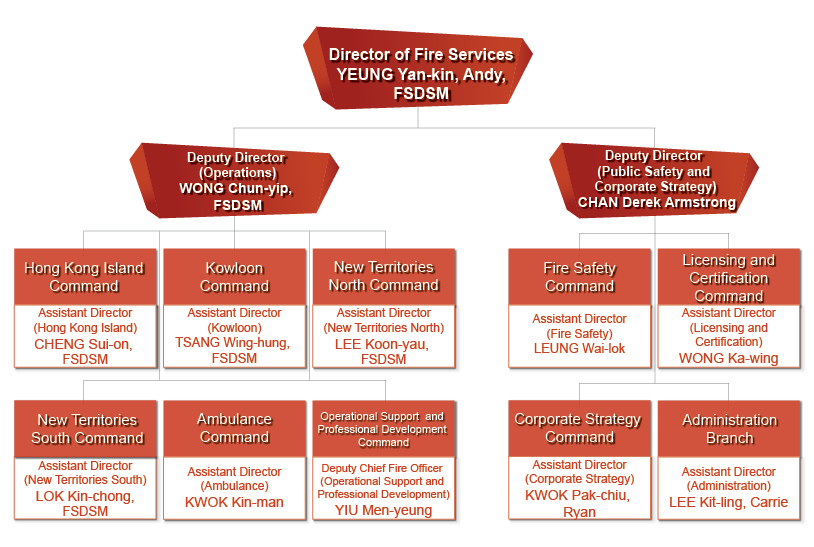 The Department has an establishment of about 10,540 uniformed personnel and about 760 civilian members. It is divided into four operational Fire Commands, a Fire Safety Command, a Licensing and Certification Command, an Ambulance Command, a Fire Services Headquarters Command and an Administration Division. Commanding this more than 11,300-strong Service is the Director of Fire Services who is assisted by a Deputy Director.

Each of the operational Fire Commands - Hong Kong Island (H), Kowloon (K), New Territories North (NTN) and the New Territories South (NTS) - is headed by an Assistant Director of Chief Fire Officer rank. Each command is organized into three to six geographical divisions, each containing four to eight fire stations.

The Ambulance Command (Amb), supervised by an Assistant Director of Chief Ambulance Officer rank, has two operational regions (Hong Kong & Kowloon Region and the New Territories Region) and the Command Headquarters. Each operational region is split into two to three geographical divisions.

The Fire Services Headquarters Command (HQ), headed by an Assistant Director of Chief Fire Officer rank to provide planning and management support to the Director as well as policy and logistical support to other Commands. It is responsible for the operation of the Fire Services Communications Centre, the Fire and Ambulance Services Academy. It also oversees issues relating to recruitment, training and examination, occupational safety and health, procurement and logistics support, information technology management, workshop and transport, welfare, as well as information and publicity matters.